Named after Guards barracks that dominates its southern side, Kasarmitori Square has served as a versatile venue over the last century, accommodating everything from military parades to dance events for young people in the 1960s and 70s.

An innovative commercial building will now invigorate the northern side of the square.

The prefabricated brass façade complex that currently occupies the site replaced an old stone building on the corner of Kasarmikatu and Pohjoinen Makasiinikatu that was demolished in the 1960s. This building will in turn be replaced by a natural stone building of modern design that respects the heritage of the square and its other prime properties.

From school to local government office

The 19th century was a time of constructing stone buildings to last, and C.L. Engel designed the first building to stand at Kasarmikatu 21 in the 1830s in this spirit as a two-storey structure that served for nearly a century as a school.

In 1918 the property was converted for use by the city building office, but it soon proved too small for this purpose, and by the time of establishing the Helsinki Public Works Department some decade later the city’s building officials were already working at four other locations as well.

Within a few years of its establishment, the Public Works Department decided to concentrate its operations in a single building at Kasarmikatu 21. This required an urgent amendment to the local zoning plan to enable the construction of a multi-storey building at this location.

Then in the mid-1960s, just three years after completing the new office building, the city also acquired the adjacent corner plot at Pohjoinen Makasiinikatu 9. An annex to the adjacent local authority building was constructed with comparative swiftness. The dark brass cladding of this new building was consistent with the trend at that time.

From residential building to annex

The site at Pohjoinen Makasiinikatu 9 was originally occupied by an ornate residential building that was designed by the architects’ firm Grahn, Hedman & Wasastjerna and completed in 1890. This building was converted for use as local government offices in the 1930s.

After falling into disrepair over the following three decades, the building was initially leased to the City of Helsinki for use as a temporary shelter for homeless men, with a decision taken to demolish it just a few years later.

The decision to tear down the old building was backed by a newly appointed young architect at the Public Works Department, who also took charge of designing the annex building that would replace it. Besides this site, the architect is also chiefly known for work on the city’s mobile kiosks.

A busy centre in times gone by

Kasarmitori Square was a centre of civic life in the early 1900s. It was the venue for the funerals of Russian officers and other important public events, and several small shops carried on a lively trade in an indoor market designed by A. Lindqvist constructed on one side of the square.

Known as Guards Hall, this indoor market building was demolished over the protests of its resident traders and despite their calls for renovation to make way for a new building in the late 1950s. The original idea was to construct a temporary modern exhibition building with commercial premises called Expo Hall. This was duly constructed in 1960, and it continues to grace the western side of the square after more than half a century.

Helsinki Public Works Department has occupied this two-address building complex since its final completion soon after the end of the 1960s.

The general low profile of Kasarmitori Square is also due to the other public administration buildings around the square that are only occupied during the working day, and only those who spent their younger days at the Expo Hall in the 1960s are likely to remember livelier times in this city precinct. Nowadays the shallow Guard Hall building houses a small post office and a grocery shop.

A new lease of life

The history of this area is long and tortuous. The reformist trend and associated passion for demolition and reconstruction that took hold in the 1950s and 60s in particular has had a substantial impact on the life of Kasarmitori Square and its immediate environs.

Now the area is once again due for a reinvigorating facelift that respects the needs of urban living when the new Kasarmikatu 21 building is completed on the north side of Kasarmitori Square in 2017. In addition to office accommodation, the building has also been designed to provide restaurant services for city residents in the evening. 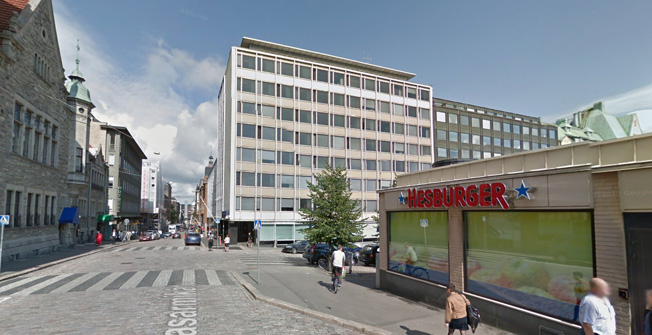 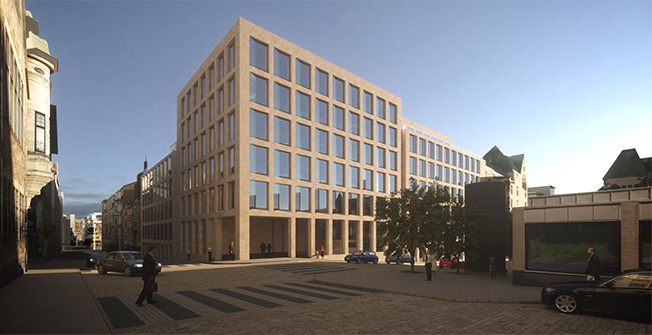 There is more to this office building on Kasarmitori Square in downtown Helsinki than bricks and mortar.

Further details of the project

Kasarmitori Square has served as a versatile venue over the last century, accommodating everything from military parades to dance events for young people in the 1960s and 70s.

The modern building has a unique location; it´s a very rare occasion to be able to build a new construction into Helsinki CBD.

Check out the architecture

The Kasarmikatu 21 development is a joint undertaking of the venture capital and real estate investment specialists Ahlström Capital, HGR Property Partners and YIT.

Some facts about the developer